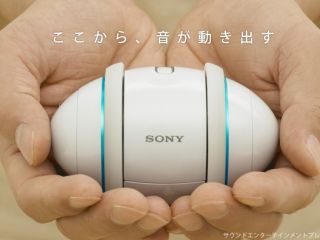 The egg-shaped Rolly twists and turns while playing music. There's just one button on the device, an on/off switch;

all other functions are controlled by a couple of rings encircling the body. One of the rings controls track and album management, while the other controls the volume settings. The two rings are hooked up to motors which make the device move in tune with the music.

At each end, speakers are hidden by dish-shaped covers which can be removed when the Sony Rolly is switched on. It has 1GB of built-in flash memory and can play MP3, Atrac or AAC files. Music can also be streamed over a Bluetooth connection.

At 300g and measuring 104mm x 65mm, the Rolly isn't that portable - you certainly can't stick it in your pocket like a regular MP3 player, for example.

Battery life is said to be five hours, when playing music only. This reduces to four hours when the device is moving, and to three and a half hours if Bluetooth streaming is switched on.

Along with the Rolly device, Sony also plans to launch a web community where you can share files with other Rolly users.