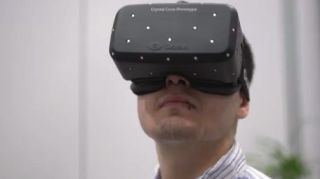 Sex and the City 3 jumped the shark

Virtual reality is destined to go well beyond gaming, and movies seem the obvious next conquest.

According to Cory Ondrejka, Facebook's VP of mobile engineering, Facebook sees it too.

The announcement that Facebook was buying Oculus Rift was a sign that it had wider plans for VR and, speaking during a keynote presentation at this week's Hollywood IT Summit, Ondrejka said that he sees Oculus Rift expanding into movies.

"I am completely excited about the intersection of Hollywood and virtual reality," he said. "I think what we're going to see over the next coming year is going to be truly spectacular."

According to Ondrejka, Imax and CGI-heavy films are ripe for virtual reality. "The assets that were already produced to make the movie can be re-rendered and can be reused to create new experiences," he said.

"I would expect that Imax is going to be one of the killer experiences."

PlayStation marketing executive Guy Longworth said during a session at this year's Games Marketing Summit that he remembers Zuckerberg asking "Can I have a tech demo?"

Seems Zuck was sneakily weighing up the competition.