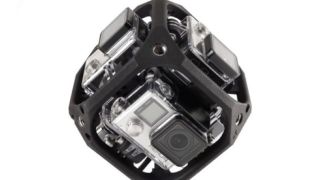 GoPro has lately been dipping its feet in virtual reality, having recently partnered with Google on a 360-degree VR camera rig, but the action cam company isn't looking at VR as a passing fad. Quite the opposite, actually.

"[VR is] gonna open up all kinds of viewing experiences and expand the lifespan of content," said GoPro CEO Nick Woodman, who spoke with Mashable.

"VR is a whole new experience that can fully transport someone into another experience."

Unlike 3D, VR isn't a gimmick, the CEO prognosticated. GoPro is already making spherical cameras, or rather rigs that use its current lineup of cameras.

"We are positioned more than any other camera company to enable VR," Woodman said, and with the release of the smallest GoPro yet, the company could be looking to make portable rigs for 360-degree VR footage capture.

While Goodman has previously hinted that GoPro is looking to release its own drones, or quadcopters, Goodman has said the company will be releasing its own consumer drone next year.

"People are getting into quads not because they like flying little quads around, but I think the original impetus is they want the incredible content that a GoPro and a quad enables," he told Mashable.

No details on the GoPro drones have been announced, but we should start hearing news starting from the beginning of 2016.

With this direction, we can only hope GoPro is working on a VR quadcopter camera rig.