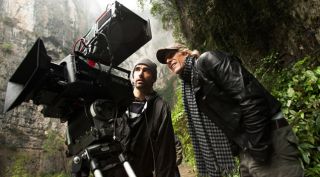 Let's face it, the appetite for 3D cinema has reached an all-time low, five years after James Cameron's Avatar promised to change the way we watched movies forever.

However, despite audience attendances for 3D features continuing to fall, IMAX isn't prepared to let the technology revert to a theme park novelty again just yet.

The company has just detailed its brand new IMAX 4K 3D camera which promises better native 3D images that'll be on show for the first time in the forthcoming Transformers: Age of Extinction movie.

The camera, used for the first time during Transformers' filming is the first fully integrated 65mm 4K 3D camera, meaning it doesn't need a beam splitter and separate lenses, with both the left and right eyes captured at full 4K resolution.

More than meets the eye?

The IMAX 4K 3D camera still retains retaining IMAX's unique 1:9:1 aspect radio, while the camera is less than half the size of the current crop of 3D cameras out there.

This compact size enabled Michael Bay and co to capture high speed chases and helicopter shots in high resolution native 3D in a way that was previously not possible.

Are you ready to give IMAX 3D another chance with Transformers 4? The video below may help you decide.