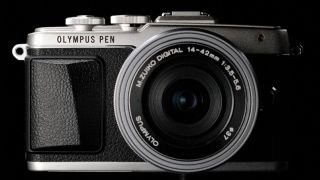 Olympus wants you to take a selfie

Olympus has announced its latest interchangeable-lens camera, the PEN E-PL7, carrying the vintage style of most of Olympus' Micro Four Thirds cameras and updated features.

You can also tap right on the screen for the shutter button, which after tapping, takes the picture in just a second, though you can also set your own custom timer.

Though there's no viewfinder, the PEN E-PL7 is heavily influenced by Olympus' OM-D range and the in-body 3-axis image stabilization is taken from the same system found in the OM-D E-M10.

Olympus is also touting that the autofocus system in the PEN E-PL7 is the fastest it's ever produced, with 81 AF points across most of the frame. Features also include sequential shooting up to 8fps, with only RAW files buffered after 20 consecutive shots.

The camera also gives you a bunch of Instagram-like filters for your selfies and shots, 'Old Film Effect' for videos and selective colour mode for photos.

There's no built-in flash, but Olympus does throw in an external one. You can also pick up accessories including a leather case and underwater housing.