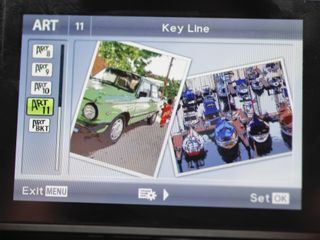 Sorry PEN users, no Key Line filter for you

Olympus has confirmed that it would not be possible to add extra art filters to its PEN series of cameras via a firmware upgrade, due to space issues.

Well-known for the kooky filters it provides on its cameras, the number of filters users can use varies between its cameras.

The recently announced Olympus OM-D E-M5 provides the widest number possible, with several new filters in addition to those found on the PEN E-P3 found on the camera.

Speaking to TechRadar, Toshiyuki Terada, group leader for SLR products at Olympus Japan, said that the ability to add extra filters to older products was not possible due to there was not enough memory within the camera to allow it to happen.

It would seem like a good idea to allow for extra filters to be downloaded via a firmware upgrade, perhaps at a price premium, similar to in-app purchases for mobile phones.

The ability to remove filters in order to replace them with those that you prefer would seem like a good compromise, but it's something that doesn't look likely for the foreseeable future.

Recently, Olympus revealed that apps on cameras had been discussed, but it would be some time before we saw them appearing.