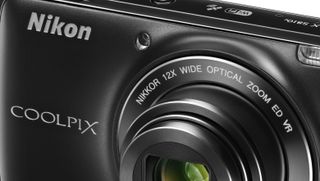 The S810c is also claimed to have a host of other "significant improvements". First up is the zoom range, which is now a 12x optical offering, doubling to 24x with Dynamic Fine Zoom (a form of digital zoom).

A back-illuminated 16 million pixel CMOS sensor is found inside the camera, which Nikon says makes it great for capturing shots in low light.

On the back of the camera is 3.7 inch LCD touchscreen with 1,229,000 dots, which is used to control the camera. Nikon also claims that the battery life has been improved - additionally, you can still use the camera while it is charging, handy if you're using it to check apps such as Instagram or Facebook, rather than shooting with it.

Along with the Android OS, the camera features integrated Wi-Fi, and comes with 20GB of free cloud storage through the pre-installed Nikon Image Space app.

Nikon says that the new camera has been designed around the Jelly Bean operating system. Downloading apps, such as image editing app Snapseed for instance, gives extra functionality to the camera. Of course, you can also download other apps such as email and social networking to quickly share your images.

Other features include Full HD video recording, an Expeed C2 processor, and the ability to create 180- or 360-degree panoramas. The inbuilt storage of 4GB can be expanded via a Micro SD port.