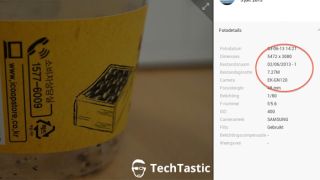 One of the more interesting innovations to come from Samsung the past year or so, the Galaxy Camera managed to impress us quite a bit.

It's ease of use, combined with Wi-Fi and 3G capabilities, and its Android 4.1: Jelly Bean operating system, made the Galaxy Camera quite a unique piece of machinery.

Samsung obviously thought so too, and is already purportedly working on not one, but two new Galaxy Cameras at this very moment.

While we've already heard plenty about the Galaxy S4 Zoom, a camera based heavily on the Galaxy S4 itself, we haven't heard much about a proper successor to the Galaxy Camera. Until now.

Though the Galaxy Camera 2 (EK-GN120) itself hasn't been spotted anywhere, some images taken with the updated device have reportedly leaked.

TechTastic got its hands on a few of the photos, and was able to learn a few new facts about just how much potential the Galaxy Camera 2 has to be bigger and badder.

Of the pictures taken, the largest came in at a hefty 5472 x 3080 resolution, which indicates the Galaxy Camera 2 will have at least a 20.9MP sensor inside.

The original has a 16.3MP sensor, which is impressive in and of itself, but getting a bump all the way up to 20.9MP on essentially an Android device is quite remarkable.

There's little other information available about the potential Galaxy Camera 2 at this point, but there's a tiny chance there may be more to come at Samsung's June 20 event.

As there's no real precedent for Galaxy Camera release dates, anything could be possible, but the original model only just launched a short while back, so perhaps we won't learn more until later this year.