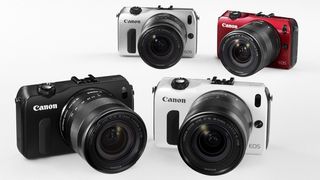 Wi-Fi, GPS, 3D shooting and voice controls will grow in 2013

During 2012, compact system cameras (CSCs) have been going from strength to strength and touchscreens are becoming more responsive and increasingly commonplace across a wider range of digital devices.

Innovative camera apps designed to streamline the process of editing, uploading and sharing your files are being continually enhanced and updated, plus there have been improvements to aspects such as Wi-Fi connectivity, remote camera control from smart devices and the debut of cameras running on Android.

With all this innovation, we can't help but begin to speculate as to what 2013 could bring to the photography arena.

Read on for some of our ideas about what we might expect to see in the New Year, and add your own thoughts in the Comments section below.

With speculation surrounding the appearance of Ultra HD (previously known as 4K) displays, and further developments in the dissemination of 3D imagery in the future, it's logical to expect more cameras that are capable of capturing the stills and movies to complement these technologies.

With 3D image capture becoming a de rigueur feature among many of the latest camera launches' specifications, it's possible that we'll see the likes of Fujifilm continuing to build on its pioneering Real 3D-series. And recent adopters of 3D capture from other brands may perhaps expand upon the functionality currently offered by their own ranges.

In order for 3D technology to take hold, however, we ideally need to see advancements in the facilities available for printing 3D stills (how about an affordable device for the home user?), as well as a greater number of lenticular displays capable of showcasing 3D images and footage without the need for 3D glasses.

The increasing availability of fast Wi-Fi services broadens the appeal of devices that are capable of taking advantage of this - cameras included. Similarly, built-in GPS connectivity has appeared in recent models' feature-sets with increasing frequency.

While we have seen improvements in the speed at which these GPS systems acquire a positive lock (and their ability to hold it as the photographer moves around) we're still waiting for the level of power these features consume to be reduced.

Likewise, the current drain on the battery that using built-in Wi-Fi results in has led to many models essentially touting a feature that's impractical to use with any real frequency. As the availability of Wi-Fi expands, we expect to see a corresponding rise in the number of models sporting more effective - and less power-hungry - systems.

We're intrigued by Nikon and Samsung's initial attempts to integrate the popular Android operating system with a camera, in the shape of the Nikon CoolPix S800c and Samsung Galaxy Camera.

Neither manufacturer has managed to produce a flawless product - as is usually the case when pioneering anything new - but the potential offered by the combination of these two technologies is certainly promising.

We suspect the other big names in the camera world haven't let this prospect pass them by, so it's likely we'll see further developments along these lines in the near future. With compact cameras being the logical starting point for the growth of this new idea, it will be interesting to see how successfully the OS can be married with the functionality of a camera in the future.

There could be further scope for expansion into the CSC and perhaps even DSLR sectors further down the line.

We've seen an increasing number of phones adopting voice commands to access key features, so could we see this technology infiltrating the camera market too? If we did, it could offer the ultimate in hands-free photography and remote control over your device's settings.