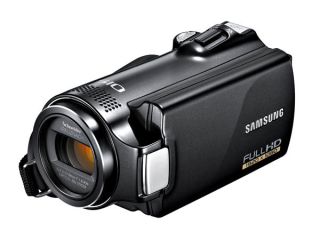 Samsung believes that getting rid of a plain-old disk-based drive means that you'll be able to get around two hours' battery life.

Interestingly, the H200 has no internal memory at all. Instead, what you are left with is just the SD card slot.

Image-wise, the camcorders come packing an impressive 20x optical zoom and a 37mm wide-angle lens. And you can take stills using the cam's 4.7MP sensor.

Samsung still isn't forthcoming about a UK release date or pricing but expect them to hit the shops in the next few months.