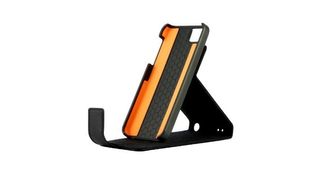 Don't leave your iPhone 5S exposed. It may die.

With a new phone launch comes new accessories and the iPhone 5S is no exception. Apple's new flagship is an interesting device, conservative in some ways while quite 'forward thinking' in others (Apple's words, not ours...)

The processor has seen an almost obligatory bump. Gone is the 32 bit A6 processor of the previous model and in its place there's a 64 bit A7 processor which promises twice the speed of the A6.

What's more interesting is the M7 motion coprocessor, which uses the iPhone 5S's compass, accelerometer and gyroscope to keep track of all your movements. While other phones have apps that do this, keeping them on all day will drain your battery fast, but by dedicating a separate processor to it the iPhone 5S largely avoids that problem - and we could see some accessories soon that take advantage of that in the fitness space.

The other major new feature of the iPhone 5S is its fingerprint scanner, which, built right into the home button, is a handy alternative to a conventional pin number or password - although again, nothing new on the accessory front there.

As the iPhone 5S is roughly the same size and shape as the iPhone 5, many existing iPhone 5 accessories will be compatible with it and many are being re-branded as such.

But the accessory men and women have rushed to get their accessories 'iPhone 5S ready' - the main difference being the flash is a little larger with two LEDs inside, so some cases have had to be retooled.

There are a few things to be aware of though, particularly when it comes to cases. For one thing you don't want the home button covered as that will interfere with the fingerprint scanner. You'll also need a larger opening for the camera, thanks to its new design.

As such there are also already a number of cases designed specifically for the iPhone 5S, along with a few other iPhone 5S specific accessories. Read on for a run-down of what's available so far and what's actually worth investing in - there's not a lot at the moment, but we'll be updating this as more become available.

Apple itself has designed a new range of official cases for the iPhone 5S. The case is made of leather, ensuring a high quality look that avoids the problem of not wanting to cover up a good looking phone with something ugly.

It has a microfiber lining on the inside which keeps your iPhone 5S protected and it covers the volume and power buttons, the whole back of the phone (other than the camera) and all the edges, with cut outs for the ports.

It's available in brown, beige, black, yellow, blue or red and has a minimalist design, with just the one colour covering the whole case, other than a faint Apple logo on the back.

It should offer reasonable protection for the iPhone 5S, feel nice in the hand and look good doing it. It's also a handy way to cover up that ill advised gold colour that some people will inevitably opt for.

The £35 asking price is quite steep, but then this is Apple we're talking about and it is a high quality product, so we'd say it's worth the money.

Apple has also launched a new dock for the iPhone 5S. It's not much to look at, just a small white rectangle really. But it does what it sets out to, allowing you to charge or sync your iPhone 5S, while keeping it in an upright position so you can still easily see the display.