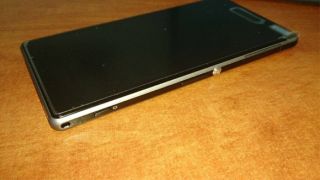 Ever since Sony announced its Xperia Z Android phone, the Japanese manufacturer has been busy building up the brand with tablets and phablets alike.

While releasing the Xperia Tablet Z and the Xperia Z Ultra could hardly be seen as over-saturation, Sony might not be done with the Xperia variants just yet.

Back in April, we heard the first rumblings of a new handset dubbed "Honami" alongside reports of the Togari, which went on to become the Xperia ZU.

Then just a few days ago, more signs Sony was readying a new Xperia were spotted when pics of the supposed Honami, now called the Xperia i1, made a showing, and revealed a possible 20MP camera attached to the device.

On Friday, yet another set of entirely different images were discovered by Just Another Mobile Phone Blog, hinting that the Xperia i1 may soon join the Xperia clan.

Though no new spec information was given, the pictures do give the rumored device a bit more grounding in reality.

The dedicated camera button on the Xperia i1 sets it apart from the Xperia ZU, and you can definitely see a different camera lens on the rear of the device than the one found on the Xperia Z.

It's still believed this will be a 20MP lens, which would give Sony's smartphone a leg up on the competition, at least until the oft-rumored 41MP Nokia Lumia 1020 arrives on the scene.

Earlier rumors suggested the Xperia i1 would include a 5-inch, 1080p display, 2.3GHz quad-core Qualcomm processor, and a Walkman audio chip, but those specs have yet to be substantiated.

It's also been suggested that the smartphone would used Android 4.2.2 Jelly Bean, feature 2GB RAM, include a a battery between 2,700-3,000mAh, and like the other Xperia devices, it too would be water- and dust-proof.

Sony is planning a July 4 event in France, and there's a strong chance the Xperia i1 could be the star of that show, meaning we could be adding a new branch to the Xperia family tree very soon.