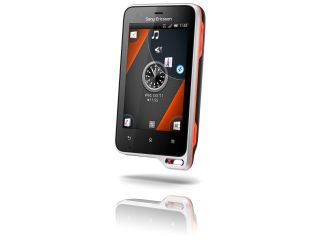 The Xperia Active is a phone for those who play sports and seemingly can't bear to be without to miss a call or tweet.

There's even a hook at the bottom of the Active and a wrist strap to make sure you don't lose your phone when you are running, surfing, sumo wrestling… whatever trendy athlete-types do nowadays.

To make sure the handset can survive a night out in Newcastle, the Sony Ericsson Active is waterproof to one metre and also scratch resistant.

Bear in mind, though, the waterproof element will only last for 30 minutes to a depth of 1m, so keeping this phone could be a lot like keeping a gremlin.

To go with its sporty nature, SE has added a whole host of sports-related apps, so you can keep track of your fitness. There's even an on-screen heart rate monitor, which may or may not beep when someone you fancy walks past.

Underneath this sporty sheen are some pretty decent specs. The whole thing is powered by a 1GHz processor with Android 2.3 inside, as well as a 5MP camera with HD functionality and a 3-inch Reality Display.

And don't worry if you have wet fingers and want to touch the screen, SE has added wet finger tracking to the mix.

According to the press release, Maria Sharapova loves this phone, too. Which is an incredible coincidence since Wimbledon is taking place at the moment.

This is a feature phone that offers a full QWERTY keyboard, a 3.2MP camera and an SMS shortcut key.