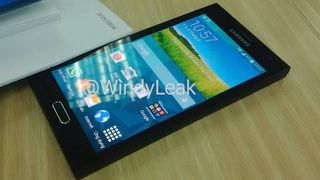 The long wait for Samsung's latest flagship Android smartphone officially ends this Friday in select markets, but the wait has only just begun for the company's next-gen handset with a 2K resolution display.

BGR has rounded up some details on the so-called Samsung Galaxy F, which is widely rumored to become the Korean manufacturer's first foray into an ultra high-resolution screen capable of displaying 2560 x 1440 pixels.

Although details have made the rounds prior to today, a pair of leaked images posted by WindyLeak on Twitter April 4 and Sunday would seem to confirm Samsung's plans for a 2K resolution display.

Samsung's mythical Galaxy F first popped up on the radar last fall, when hopes of something other than a plastic shell for the new Galaxy S5 were seemingly dashed.

That's because the Galaxy F is said to be housed in a metal frame packing a quad-core Snapdragon 805 processor and a whopping 3GB of RAM, necessary to help push all those pixels onto the screen.

Those specs, coupled with a rumored 16MP rear camera, would make the Galaxy F a more premium device than even Samsung's Galaxy S series, and presumably at an even higher price tag.

Reports at the time pegged the Galaxy F launch for last month - a target date Samsung clearly missed, but that was presumably to give the Galaxy S5 a clear runway for its long-awaited April 11 release.