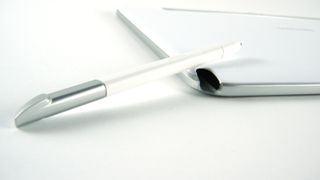 Is there a new Note on the horizon?

According to a listing on the Bluetooth authentication website Samsung is currently developing a tablet sporting the model ID SM-P901 and, while this posting doesn't reveal any further details other than Bluetooth 4.0, the ID does match previous reports surrounding the slate.

Perennial tech leaker @evleaks called out the 12.2-inch tablet back in July with an Exynos 5 Octa processor (that's eight cores, people) named alongside the 2560 x 1600 resolution display and SM-P900 moniker.

These supposed specs would give the 12.2-inch tablet a similar set up to the new Galaxy Note 10.1 which also sports 3GB of RAM and Android 4.3.

It's thought this tablet will also sport a S-Pen stylus which would put it in line to be the Samsung Galaxy Note 12.2, but it's sheer size and assumed weight would surely make it a little unwieldy in the hand.

We're still waiting on news of a potential Galaxy Note 12.2 release date and confirmation from Samsung itself if the device actually exists or not. Watch this, relatively large, space.