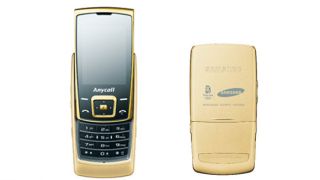 One of Samsung's earlier gold phones, the 2008 Beijing Olympics E848

Welcome to another game of Apple vs Samsung, where two of the richest tech companies in the world - and their fans - fight pointless, petty battles and everyone loses.

This time Samsung finds itself on the defensive as Apple fans accused it of copying the gold iPhone 5S with its gold Galaxy S4.

Samsung revealed the gold Galaxy S4 to the world last week, but the phone was actually announced in the Middle East in late August and launched in the region before the iPhone 5S was even unveiled - and there lies only part of Samsung's argument.

In fact, on Sept. 28 the official Samsung blog Samsung Tomorrow published a non-comprehensive chronicle of its history with gold handsets, the first of which actually dates back to 2004.

All that glitters is at least colored gold

The Samsung Mobile Arabia Twitter handle sounded off last week about the gold Galaxy S4, pointing out that it went on sale in the UAE two days before the iPhone 5S was unveiled.

And the gold Galaxy S4 was launched in the United Arab Emirates, Kuwait and Qatar in September.

There's no indication that this battle will reach a court, since luckily even Apple and Samsung can't trademark a color (yet).

Normally, that wouldn't stop fans from fighting the companies' petty battles for them in message boards and comments - but maybe we can put this one to bed, people?