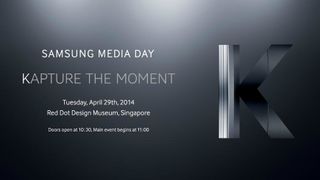 Samsung: teaching us to spell since 1938

Samsung has just announced a media event that will take place in Singapore on April 29, and there's one big K-shaped hint that the Galaxy S5 Zoom will be the guest of honour.

Going by all the leaks so far, the Galaxy K looks like the codename for the Galaxy S5 Zoom. Doing the maths, it's pretty safe to say that Samsung's "Kapture the Moment" invitation is a big nod to this.

The Galaxy S4 Zoom was announced two months after the S4 flagship, so the S5 Zoom has been written in the stars.

However we reckon Samsung will drop the whole 'K' business come launch and follow tradition by giving the phone the name we all expect: the Samsung Galaxy S5 Zoom.

Meanwhile over at the FCC, it looks like the Zoom has already been flaunting its wares. As spotted by Phone Arena, the FCC has just approved a Samsung phone going by the moniker of SM-C115, a name that's already come in up prior leaks.

And if those leaks are to be believed, the 'K' will have a smaller housing than the S4 Zoom, alongside a 20-megapixel camera with 10x optical zoom.

A 4.8-inch display has also been touted, along with NFC and Android 4.4 KitKat.