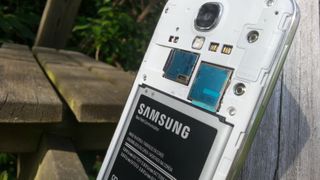 Over in Germany, a bunch of lucky Samsung Galaxy S4 owners have begun receiving a software update that brings some nifty improvements to the handset.

Not least the option to move apps to an SD card to free up room on that controversial 16GB (technically revealed to be only around 9GB) storage allowance.

Also on the menu are some unspecified camera firmware updates plus the ability to record HDR video and a fix for the scroll-smearing issue that gives everything a purple effect when you're thumbing through.

You'll be able to make use of a new semi-transparent status bar, some new icons in the settings menu (control yourself) and the whole shebang ought to be easier to read too.

SamMobile, which first reported the roll-out, says the update seems to be going to Snapdragon-toting S4s first (GT-I9505) but the site's sources tell it that we'll also see the software hitting the Exynos S4 at some point in the near future too.

Of course, you'll have to use Kies to get at it. Swings and roundabouts.