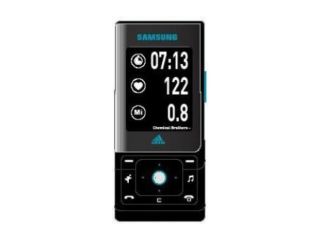 The Samsung F110 Adidas phone is finally on its way to the UK, according to reports this morning.

Aimed at fitness freaks, the F110 Adidas handset boasts functions such as a heartbeat monitor and a step counter, Newlaunches.com reports. They're the gimmicks in what's basically a 'ho-hum' specification, incorporating GPRS/EDGE connectivity, a 2-inch screen, a 2-megapixel camera and an FM radio tuner. There's also an MP3 player for tuning into your favourite tracks when you're out jogging or down the gym.

What does branding add to a phone?

So why partner with Adidas? Why doesn't Samsung just call the F110 a 'sports phone'?

The addition of a top brand undoubtedly adds extra kudos or desirability to a phone. Especially if it's not advanced enough to sell on the strength of its feature-set alone.

LG's tie-up with Prada is a good example of this. Prada got to extend its luxury branding into the mobile phone market, enabling people who had an affinity with the Prada name to extend that to their phone. Got a Prada bag? Here's a slick-looking Prada phone that you can put in it. Simple and effective marketing.

For LG, its partnership with Prada helped boost the fortunes of a touchscreen phone that didn't have 3G, only had a 2MP camera and couldn't compete with Apple's arguably more stylish iPhone.

The gadgets you own say something about the person you are. We're increasingly being defined by the colour of our iPods, the ringtones we download and the photo we have on our phone's desktop.

It's part of a wider trend towards the personalisation of technology. We've already seen the Levis phone hit the UK; an Audi phone looks like following. Where does the branding end? How long before we get a Harrods phone? Or a range of football club handsets that come with exclusive mobile TV deals?

The Samsung F110 Adidas phone looks like being released this month. No pricing details have been mentioned.