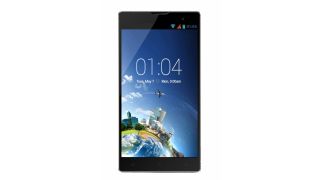 If you're after an octa-core phone and you don't fancy shelling out Samsung or HTC money, new player Kazam might have the answer.

If the Tornado 2 5.5 is a Twinkie, then the 5.0 is a Twinkie with a bite taken out of it: its specs are much the same other than a smaller screen size (5-inches) and the cameras both take a dive to 8MP on the back and 2MP on the front.

Strangely, Kazam has decided to launch its highest-spec handsets with Android 4.2 - that's not even the latest version of Jelly Bean, let alone Kitkat.

Update: We've just heard that the Tornado 2 5.5 will be coming with KitKat after all, but the 5.0 is still set to launch with Android 4.2.

It was a while since we heard anything from Kazam, the mobile-phone making upstart that promised to shake up the phone market in November 2013 before disappearing completely.

But earlier this month it confirmed that its range of Android handsets would be hitting the UK in Q2 - that's sometime between April and June.

There's no detailed release information for the two Tornadoes just yet, other than that they will go on sale across Europe.

If you do decide to invest in a Kazam phone, it leaves you only one question to consider: who you gonna call?