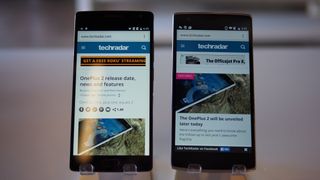 OnePlus has finally announced the long-anticipated OnePlus 2, offering vastly improved specs over the OnePlus One, a device that many considered to be the ultimate Android phone.

With it being a little over a year since the original OnePlus One was released, there's been plenty of time for mobile tech to develop and improve.

But just how has the company taken advantage of these improvements in the OnePlus 2? And is the this new Android really that much of a better device?

OnePlus 2 vs OnePlus One: Design

While companies such as Samsung and even Apple have radically changed the design of their flagship phones over the past year, OnePlus has taken a more subtle approach. The OnePlus 2 keeps the classic sandstone black finish found on the OnePlus One and the overall shape of the device is the same. For those who don't like the sandstone black look, however, OnePlus is offering a number of other backings through its StyleSwap service, like it did with the OnePlus One.

The design is similar, yet it isn't exactly the same. The camera module on the back of the device has been moved down a little, and the Cyanogen logo has been removed without replacement, making for a slightly more minimalistic look.

Another change is the new metal frame found on all edges of the device, as well as the use of a reversible USB-C port. The OnePlus 2 is one of the first devices to use the new USB-C standard, allowing for faster data transfer for wired connections.

The metal frame may have been included to give the device a sleeker look despite its thickness. Unfortunately the OnePlus 2 is slightly thicker than the OnePlus One, coming in at 9.85mm thick, compared to the One's 8.9mm.

OnePlus has also included a new slider on the side of the device, offering more control over notifications. Called the "Alert Slider," the switch basically allows users to either disable notifications altogether, only show priority notifications, which can be customized, or to show all notifications.

Last but not least is the fingerprint scanner, included in the home button of the device. This should offer users another layer of security and allow them to save time on having to use passcodes every time they want to access their phone.

OnePlus 2 vs OnePlus One: Display

Another point of similarity between the two devices is the display. While it's important to note that the OnePlus One was always about the specs under the hood for the price rather than making things look pretty, it would have been nice to see OnePlus up the ante a little. Still, the display isn't bad, coming in at 1920 x 1080 pixels, with a pixel density of 401 pixels per inch. The 5.5-inch LCD display is also protected with Corning's Gorilla Glass, which should protect against most accidental drops.

OnePlus 2 vs OnePlus One: Processing and RAM

The octa-core Snapdragon 810 is 64-bit ready and is runs with four cores at 2Ghz and the other four at 1.5Ghz. Coupled with a massive 4GB of RAM, the OnePlus 2 is an absolute powerhouse, even more so than the OnePlus One, which "only" had 3GB of RAM. Any power users out there that regularly have multiple high-power apps running at the same time should take a serious look at the OnePlus 2.

Coupled with the Snapdragon 810 processor is the Adreno 430 graphics processor, which is a great graphics card, and is touted by Qualcomm as being able to handle "rich 2D and 3D experiences."