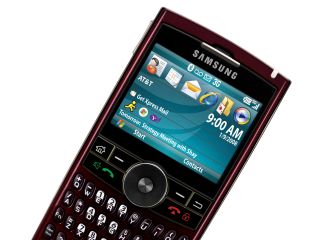 Microsoft, AT&amp;T and Samsung showed off the Blackjack II, which runs Windows Mobile 6

Despite Apple's strong iPhone sales, analyst IDC reckons Windows Mobile will be the fastest-growing mobile operating system over the next five years.

The surprising stat was rolled out by Microsoft during a tedious announcement about Microsoft System Center Mobile Device Manager 2008 by Steve Ballmer last night.

To cut a (very) long story short, the new software from Microsoft will help large companies manage hordes of Windows Mobile smartphones in much the same way as they would group-manage laptops or PCs.

"People expect to be able to do more and more with their mobile phone," Ballmer said during his keynote to the Cellular Technology Industry Association (CTIA) of America. "We're [delivering] Windows Mobile experiences that bridge the things people want to do at work and at home."

Windows Mobile might not be the most user-friendly OS, but Microsoft is clearly hoping to build on its Office savviness to parry off smartphone competitors like Apple.

Apple's slashed-down version of OS X might have more user friendliness and is far better for personal use, but it's unlikely to interface with most business email systems any time soon. Symbian's foothold and ease-of-use in both personal and business mobiles is a big hill for Windows Mobile to climb. Meanwhile, RIM's Blackberry is still the phone of choice for push email.

Microsoft is sure to make Windows Mobile easier to use as it also seeks to gain extra traction in the consumer market, but will have to work harder on its partnerships with device manufacturers.

With the new software, companies will be able to deliver new apps to phones 'over the air' as well as connect people via Mobile VPNs (Virtual Private Network) to access work information from home. Clearly Microsoft recognises that with more people working from home devices are needed that can cope with social use as well as being able to keep people in touch with the office.

At the launch Microsoft, AT&T and Samsung showed off the Blackjack II. Running Windows Mobile 6, it has full support for Mobile Device Manager as do other new phones from the likes of HTC and Motorola.