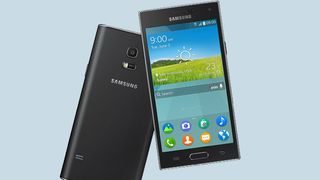 Took your time, didn't you?

We've been reporting on the state of play of Samsung's Tizen operating system for a few years now (all those broken promises), but the day has finally come: Samsung has unveiled its first consumer Tizen phone.

The Samsung Z, as it's titled, also has some decent specs to its name, including 4.8-inch 720p AMOLED display, 2.3GHz quad-core processor, 2GB of RAM, 16GB of internal memory and 8MP rear shooter.

But it's Samsung's own-brand operating system that's stealing the show here, something that was given its first test run in Samsung's Gear smartwatches.

Wrath of the Tizen

On the phone it doesn't look too different to Android, with features like S Health and Download Booster also onboard.

The bad news is that the phone will only be available in Russia, with some other target markets to follow.

However, if Tizen proves a success, we fully expect to see Samsung to begin rolling it out to more countries and more devices down the line - it's already confirmed to be coming to TVs this July.