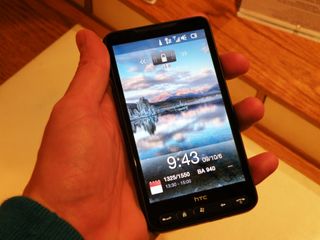 The new HTC HD2 – you may remember it as the Leo

HTC has announced a new phone to its line-up, the HTC HD2, with a massive 4.3-inch screen.

Previously known as the Leo, the new phone runs Windows Mobile 6.5 and also sees the debut of a capacitive screen on a WinMo device, meaning no stylus for this bad boy.

HTC is bringing its Sense UI with the HD2, previously seen on the HTC Hero and soon on the Tattoo, meaning it's making its debut on a Windows phone.

The 4.3-inch display is huge, beating all other sizes available on the market at the moment, and also features pinch and zoom capabilities thanks to multi-touch from the capacitive screen.

There's a 5MP camera with dual LED flash, as well as a 3.5mm headphone jack at the bottom, meaning it's much better specified than other HTC mobile phones anywhere near this screen size too.

It will also work as a wireless modem for laptop users, in a similar way to the mobile MiFi units at the moment, meaning a laptop can connect to the device via Wi-Fi and share its 3G signal, which is pretty cool.

It will be available at the end of this month, although prices haven't been given as yet.

Stay tuned for our multi-picture hands-on with the HD2, featuring a special guest appearance from HTC CEO Peter Chou himself.