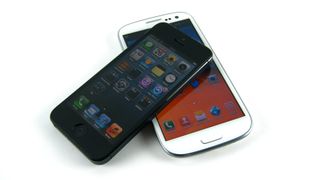 The smartphone battle in Australia is a two horse race, with Google's Android having played runner up to Apple's iOS for the past few years.

But that all changed this month, with analyst firm Telsyte claiming ANdroid has scooped 44 per cent of the Australian smartphone market, pipping Apple's 43 per cent.

When combined, the two platforms account for over 10 million handsets in Australia, used for both personal and business use.

This change in rankings is especially noteworthy given that just two years ago in 2010, Android accounted for just six per cent, compared to Apple's 39 per cent.

With an army of handsets across a range of price points, Android was always going to overtake iOS at some point.

With Windows Phone 8 fresh on the market and BlackBerry 10 just around the corner, it will be interesting to see if the two horse race can handle some competition.

And if it can, whether Microsoft or RIM is capable of stepping up to the task.