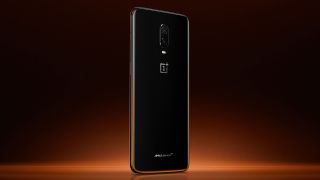 The OnePlus 6T McLaren Edition smartphone has been officially unveiled during an event held at the performance car maker's British HQ.

The headline features for the McLaren Edition of the OnePlus 6T include a new color variant, with McLaren's signature 'Papaya Orange' wrapping around the bottom edge of the handset and fading to black as it reaches the top, 10GB of RAM and a new fast charging technology.

OnePlus has also created a carbon fiber-like pattern under the rear glass, plus the McLaren logo also sits on the back of the phone.

With 10GB of RAM, the OnePlus 6T McLaren Edition adds two extra gig to the 8GB, top-spec standard 6T. You still get 256GB of storage though, like the top-spec 6T model.

A day's power in 20 minutes

The OnePlus 6T McLaren Edition debuts a new technology for OnePlus, Warp Charge 30. Building on the brands Dash Charge technology, OnePlus claims Warp Charge 30 can give you a day's power in 20 minutes. That's down from 30 minutes with Dash Charge, making Warp Charge 38% faster.

It's called Warp Charge 30, because 30 Watts of power will flow into the handset when charging.

The OnePlus 6T McLaren Edition release date is set for December 13 in Western Europe and North America, with availability in India, China and the Nordics soon after.

Considering the price of Huawei's Porsche Design and Oppo's Lamborghini edition handsets, the price increase for the OnePlus 6T McLaren Edition is relatively modest, although the upgrades provided here are relatively minimal.

You do, however, get a McLaren Speedmark logo in the special presentation box as well, made of the same carbon fiber as the firm's F1 car.

This is likely to be a limited edition handset, although it's currently unclear how many unit will be available.