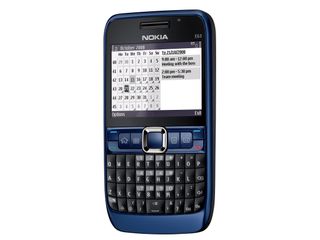 The Nokia E63 in lovely blue

Nokia has released another QWERTY-based phone, the E63, aimed at the business market and hopes to steal some of RIM's BlackBerry Storm customers in the process.

It's pretty cheap as well, coming in at just €199 (c. £160), which is a lot less than the similarly specified handsets from RIM.

For instance, the Bold is going to cost around £400 if you want to pick it up SIM free, although subsidies from Vodafone will knock that down considerably.

The E63 runs on the S60 system, which means a lot of the 'fun' applications and tricks we're used to from Nokia will be present on this handset too.

To that end, Nokia is offering both a professional and personal mode, allowing users to switch off from the daily grind when they get home with just the press of a single button.

It also offers Wi-Fi, a 3.5mm headphone port (a first for the E-Series) and 1GB of free storage on Nokia's Files on Ovi site, as well as being 3G-enabled for super zippy web browsing.

A 2MP camera is adequate (you hear that Apple? Adequate. Have a think about that. Just about good enough) for day to day snaps, and it comes with a microSD slot to add to the pitiful 110MB internal memory.

Shipping in blue and red, this handset will likely be available in time for Christmas, so you've got something to buy for the business person in your life.