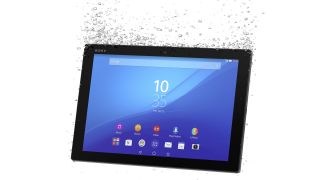 While it might seem like the tablet market is starting to slow down, Sony still thinks it can take on the dominant iPad with its new high-spec Xperia Z4 Tablet device.

The 10.1-inch tablet builds on the already impressive Z3 Tablet Compact, which duked it out with the Samsung Galaxy Tab S for the title of best Android tablet throughout 2014.

However, Sony is gunning for top spot this year by packing in a Snapdragon 810 chipset, 3GB of RAM, a 2K screen, a minimum of 32GB onboard storage (with microSD expansion) and a 6000mAh battery.

And if taking pictures with a tablet is your thing, you've got a rear 8MP camera to play with here, and a 5.1MP snapper on the front.

Unlike us troll-like TechRadarians, it's what's outside that counts here, and the design of the Sony Xperia Z4 Tablet is hugely impressive.

The weight has been shaved yet again to a miniscule 396g (for the heavier LTE version) and it's got a surely-this-can't-get-any-thinner 6.1mm thickness.

Sony's flagship goodies are on board too, with PS4 Remote Play for getting a taste of your console while in the bath (this thing is also IP67 rated to withstand a huge amount of water and dust, although we should warn you that the PS4 controller isn't) and DSEE HX to either play back high res audio files or improve the quality of your MP3s.

Sony's also betting big on the enterprise / laptop hater here, by offering the BKB50 Bluetooth keyboard to turn your tablet into a notebook when clipped into the hinge, offering a trackpad for mouse manipulation too.

Sony's retooled Android Lollipop to a degree as well, by bringing up a start menu and task bar when the Xperia Z4 Tablet enters laptop mode, which you can access with the mouse or by prodding the screen – it's possible Microsoft might get a little grumpy when it sees that.

There's sadly no word on a Sony Xperia Z4 Tablet release date or price – however, we'd expect it to be arriving by the end of April, and if previous pricing is any indication it'll cost around £500 (about $770, AU $990, although those prices are converted directly) for the base 32GB Wi-Fi model.