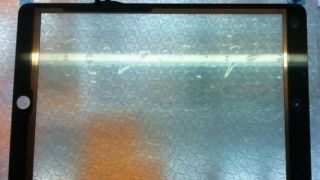 The iPad 5 is rumored to launch very soon, as early as this fall, and as we've come to expect with just about every product on the planet, the leaks aren't showing any signs of slowing up.

A listing on Macfixit Australia spotted today divulged a series of images "from the company's supplier" stating the pics are of the next-gen iPad's front panel and digitizer.

If the photos are indeed the next iTablet, the panel proves previous leaks correct in stating the bezel will be thinner than on previous models and will mimic the iPad mini.

Thin is in for Apple

Macfitxit's information detailed that the tablet will now have two connectors instead of one, and also include the following change: "FFC (Flat Flexible Cable, like the iPad 2/3/4) to FPC (Flexible Printed Circuits, like the iPhone 4/5)," further showing that Apple is intent on creating a slimmed down tablet.

The site also claimed the display area is the same as the iPad Retina and that the ITO (Indium tin oxide) is exactly like the iPad mini.

If these leaks are true, we could see the iPad mini enlarged for meatier hands but with thinner bezels allowing for a nicer, bigger screen to better see the new iOS 7 on.