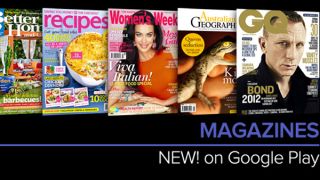 With Android tablets like the Nexus 7 and Kogan Agora 10-inch ICS now prolific in Australia, it's no surprise that Google has today begun selling magazines in Australia through the Play Store.

With magazines from major publishers, including ACP, Pacific Magazines and NewsLifeMedia, the move sees Android continue its rollout of features to compete with Apple's iOS operating system.

To entice users, publishers are offering the first issue free to subscribers, while some magazines will also launch with back issues available to purchase.

Text only and interactive

One advantage of the Google magazine platform is the ability to view titles in a text only version, which strips out all images and ads for an easy reading experience. Text size is adjustable, making long form articles much clearer to read.

But for those who only like the idea of interactivity in their digital magazines, Google also offers that functionality, marking interactive magazines with a special badge in the Play Store under the magazine's cover.

Interactive magazines are restricted to 7-inch and 10-inch form factors however, ruling out the ability to enjoy them on devices like the Samsung Galaxy Note 2, or the 8.9-inch Galaxy Tab.