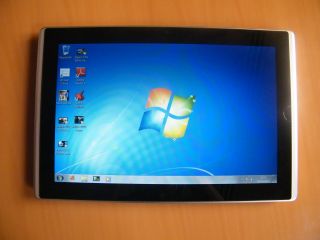 Are Windows tablets about to be revolutionised even before the launch of Windows 8?

Today we used a Windows 7 tablet that delivered an equivalent user experience to an iPad 2 while doing so much more.

And it was an 18-month old single-core Atom tablet, too. Yes, really.

We wouldn't have believed it with our own eyes if we hadn't sat there swiping, zooming and firing multiple video streams across six different screens and devices with our own fingers. And all incredibly smoothly.

What Francois Piednoel, Senior Performance Analyst at Intel, and his extensive team have managed in the last nine months is quite staggering.

It has created what it calls a recipe for an improved end user experience and Piednoel has been travelling Taiwan the last three weeks talking with the tablet manufacturers and giving away this secret.

There's no altruistic reason why Intel wants the rest of the competition to succeed - once the software limitations are out of the equation then the tablet battleground then becomes all about hardware performance once more.

And Intel knows that in terms of straight performance chops its processors have got the edge.

What Apple knows, and what Intel has only just realised fully, is that the end-user experience is king. We've all been benchmarking the latest tablets and the performance figures rarely ever show the iPad 2 as the winner.

All the perception model testing that Intel carried out in the last nine months though, showed that Apple's products just felt better to the end user. And much of that, it seems obvious, is down to the responsiveness and the smoothness of the device when you use it.

"If you run the benchmarks on an iPad 2 it doesn't get the best score...there's a disconnect between the two," said Bin Fu, one of Intel's Benchmark Managers.

The marriage of software and hardware that Apple has created with its devices means that it has total control over how they work as a whole.

"Apple had a recipe, now Intel has our own recipe to do that," says Piednoel. "The biggest strength of Apple - they got this wisdom from a platform everybody knows as the Amiga 500. All of those tricks come from this era, small hardware, difficult to program, but it was around for years."

The bottleneck for all tablets, whether they're MeeGo, Android, Windows or IOS, is the memory bandwidth and Piednoel explained the problem in simple mathematical terms.

Intel found the key to a good user experience over a mediocre one was to have a screen that scrolled at 60fps. That is one of the main things separating the iPad from its rivals.

In order to do that though takes an incredible amount of resources meaning the operating system needs some serious optimisation routines to cope.

The 18-month old tablet we were presented with had a resolution of 1300x800 with a 32-bit screen running at 4bytes per pixel. That equates to needing 256MB/s to redraw the screen at 60fps.

When you factor in Windows 7 transparency layers then you triple the required bandwidth. Eventually you end up with an operating system that writes 7 times for each pixel under Win7, the effective pixel-depth. Under Android that drops to around 6 and with iOS around 4.

Pixel-depth is how many times you are going to draw the pixel on the screen for a certain resolution.

With Intel's demonstration software layer running happily on top of a standard Windows 7 installation, it drops to 4 times like the iPad.

Still that requires a full 1GB/s of memory bandwidth and when the total platform bandwidth of tablet platforms is between 1.6GB/s and 2.4GB/s that's no small number.

And that's just to get the screen scrolling at 60fps.

That then leaves the app programmer only 600MB/s on an Atom platform with which to work. If he uses any more than that and you start dropping frames and the end user experience deteriorates.

"To make something like an iPad then you need to be a reasonable person," explains Piednoel. Meaning that you need to stop the programmers making calls on the hardware at the expense of the user expeerience.

Another issue with the Windows touchscreen experience has been the complete lack of responsiveness.

The iPad has a reaction time of around 15 milliseconds, so you barely notice the lag between moving your finger and the screen moving. In Windows tablets programmers have been unable to get the response time below 200ms.

Essentially it's all down to the fact Windows is a mouse-centric OS. The reason the 200ms time has become a barrier is because that's the amount of time the OS waits before executing a single click order.

Why? Because it needs to wait around to see if there's going to be a second click...

This is what Intel calls a eureka moment.

Now by fooling the Windows OS into thinking the tablet overlay is a video game it suddenly gains access to the Direct Input libraries and response time is carved up.

As Matt Dunford, World-wide Benchmarking Manager states, "there were some things in the OS that were limiting Atom from achieving its potential."

With this simple software-level fix in place even as ancient, and seemingly pathetic a tablet as the single-core Atom device we had in front of us is, it can do things the iPad simply hasn't the horsepower to do.

There's now no waiting around for Microsoft to get its next, touch-friendly version of Windows out the door.

Within 12 months the playing field could be levelled by a simple software download. And you know what? That Windows 8 demo we saw earlier in the week is suddenly looking even more tasty.

Check out our video below: