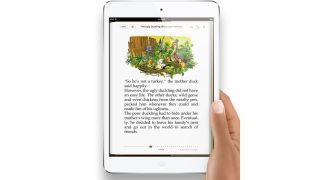 iPad mini allows users to go over the borderline

The new iPad mini has been a hot topic of conversation since its unveiling Tuesday alongside other Apple newcomers like the fourth-gen iPad,

Even though there are plenty of positives (adding Siri) and negatives (losing GPS in Wi-Fi versions) to the iPad mini, Apple has made sure the tablet still provides a great user experience.

Much has been made about the 7.9-inch screen having a larger surface area than other competitor tablets like the Kindle Fire HD and the Nexus 7.

However, to get that surface space, Apple had to trim the size of the bezel down a bit, which means users' hands will rest on the screen when holding the device in portrait.

Not to worry though, as Apple revealed it improved iOS 6 to be better at recognizing accidental touches on the outer edge.

In making the iPad mini, Apple had to consider the size of the bezel along the side of the device.

Leaving it as large as those found on the iPad wouldn't give users as much screen space, and thus the iPad mini won't be able to replicate the iPad experience nearly as well.

Since the bezels are smaller, that means the odds of a user's hand resting on the screen increase when holding the device upright.

To alleviate the response of a thumb resting on the screen, Apple refined iOS to allow it to better detect the difference between resting and intentional touches.

Apple's design page for the iPad mini describes the new feature, saying, "iPad mini intelligently recognizes whether your thumb is simply resting on the display or whether you're intentionally interacting with it. It's the kind of detail you'll notice - by not noticing it."

It's the kind of feature that doesn't necessarily make the device more or less attractive, but does make it better for everyday use.