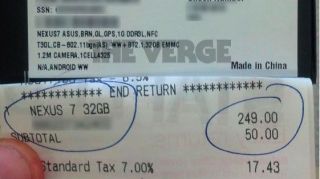 The mythical 32GB Google Nexus 7 appears to be very real and has made its way into the wild.

After a series of Big Foot like reports about the pumped-up Android tablet surfaced, a reader named Shaun tipped off The Verge with photos "proving" his new 32GB Nexus 7 exists.

He was able to score the Asus-made tablet at a Staples in Kissimmee, Fla.

From the photos he sent, it looks like the new Nexus runs Android 4.1.1 and has about 28GB of available space. Also there was no $25 (UK£16/AU$24) Google Play gift certificate included.

What next for Nexus

There have been questions about how the 32GB Nexus 7 would fit into Google's tablet lineup when rumors of its existence were circling the web earlier this month.

Some thought the 32GB Nexus 7 would replace the 16GB version since they are now at the same price point.

But Android Police dredged up an internal photo from Staples that look to show that the 16GB model will be bumped down and Google will do away with the 8GB model.

But how much the newly branded 16GB Nexus 7 will cost now is unclear at the moment.

The photo also suggests that the 8GB model will go on clearance on Oct. 30. Good news for those looking to snatch up the low-end device for a low price before it disappears.

But it looks like the 8GB versions will be hard to come by in physical stores, according to Android Police.

Not many brick and mortar stores carry the 8GB Nexus 7 anymore, so those looking to get a good deal will have to do call a few office supply stores to track one down.

Google might sell the 8GB model online, but that seems unlikely.

TechRadar got reports that the 32GB Nexus 7 was accidentally shipped to a few customers just last week. We also saw the high-end model pop up on a few retailer sites. One site even had an Oct. 24 ship date for the product.

Google has stayed mum on the whole issue. But the search giant is expected to break the silence during its Oct. 29 Android event in New York.

Via The Verge, Android Police