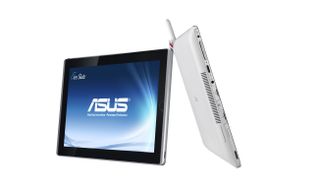 If you were hoping for Honeycomb on the Eee slates, you could be out of luck

Asus has dropped a bit of a clanger. Having announced that its latest Android tablet line-up would launch running Android 3.0 (Honeycomb), a spokesperson has now said that the OS will, in fact, be 2.3 (Gingerbread).

Update: Asus' PR team tells us that John Swatton has been misquoted.

Whether or not this is true, Asus is adamant that it will ship the tablets with Honeycomb if it is available; there are no guarantees with Google's release schedule for Honeycomb still under wraps.

When it comes to the delays mentioned below, Asus' spokeswoman told us that the Eee Pad Transformer should see a UK release date of May/June, while the Eee Pad Slider will hit the shelves in August/September, straddling Q2 and Q3.

We'd certainly expect to see Honeycomb in the wild by May having been officially unveiled at CES in January.

Bit of a hold-up

When questioned about why Asus had announced that the tablets would ship with Honeycomb, Asus Marketing Specialist John Swatton told The Inquirer, "That was a mistake."

The new tablets were announced at CES earlier this month and were set to be released in Q2 2011, but the same spokesperson said that they will not be on the shelves until some time in Q3.

Three different versions of the Android-running Eee Pad were launched at CES 2011; the Eee Pad Slider which has a QWERTY keyboard alongside a 10.1-inch touchscreen, the Eee Pad Transformer without a built-in keyboard and the Eee Pad MeMo which has a smaller 7.1-inch screen.

All were said to come running the tablet-centric Honeycomb (Android 3.0) OS.

Despite the delays, Swatton insisted that the operating system would still be Android 2.3 - the reasons for this aren't clear and Asus is yet to come back to us with an official comment