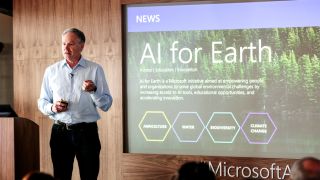 Hot off Google unveiling its own initiative for improving artificial intelligence's impact on humanity, fellow AI research giant Microsoft has announced a program dedicated to improving the planet through machine learning.

According to Microsoft, AI for Earth will operate on three major "pillars" — granting access to Microsoft's resources for research groups, providing educational resources to teach said groups how to utilize AI optimally and special lighthouse projects that innovate AI's ability to study the environment.

To that effect, Microsoft also announced today it will invest $2 million into AI for Earth, which will manifest as research grants enabling access to its cloud and AI tools, as well as technical training on its various platforms.

Though a newly announced initiative, Microsoft has already demonstrated concepts for what AI for Earth could accomplish, including past work where it's used machine learning and cloud computing to monitor watershed in the Chesapeake Bay, track soil moisture levels, and power Project Premonition — a multi-step program that aims to analyze and prevent mosquito-borne disease outbreaks.