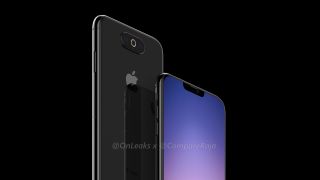 There's a new iPhone 11 leak of a render that gives us an idea how Apple's 2019 smartphone may appear. The good news: it looks a lot better than before.

Last week, notable leaker @OnLeaks revealed a render of a possible prototype for the upcoming iPhone 11 displaying a triple-camera setup set in a square mounting. Today, he released another rendering created with partner CompareRaja that shows off a trio of lenses in a horizontal strip – which could be an alternate prototype for Apple’s next smartphone.

Shortly after the first leak, a report from the Wall Street Journal claimed that a three-camera iPhone was coming – but it might only be the highest-end (like the iPhone XS Max-equivalent) of three models Apple will announce. The other pair of phones will only have two cameras, which means these leaks likely only refer to the biggest version coming this year.

As opposed to the camera block in the upper-left corner in the first render, this new leak shows off a (much more aesthetically appealing) single line of lenses in a central blister toward the top. The front notch is also slightly (but not noticeably) smaller than that on the iPhone XS.

Other triple-camera phones like the LG V40 have set their rear-facing triple cameras up in a similar horizontal arrangement – but Apple’s big development may be to swap out the rear-facing camera flash for a light ring around the central camera. A microphone also sits below that middle lens.

And yet, CompareRaja asserts in its post that both the square block and horizontal line arrangements are legitimate prototypes. All three eventual models for the iPhones slated to come out in 2019 are still in the EVT (Engineering Validation Test) phase, so either of these could be eventual designs for any of them.

Perhaps each design will be produced as different-tier versions, like this generation’s equivalent of the iPhone XR and iPhone XS Max.

In any case, these are radically different looks for a device from a company known for prizing aesthetics. If we were to pick one of the two, it wouldn’t be a hard choice.

Other rumors and reports have spun out possible details of Apple’s next devices, like the more affordable iPhone XR-equivalent having only an LED screen while the pricier options get OLED displays. Check out all we know on our iPhone 11 page.