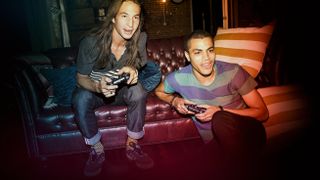 Sony's announcement of PS Vita TV this week has cemented the fact that it is a company that has Apple firmly in its sights.

As its name suggests, the (currently Japan-only) tiny box's main ability is to play PS Vita games. But it is its streaming capabilities that makes it much more of an interest: it will give any TV access to Sony's Music and Video Unlimited services.

In this sense it is Sony's answer to the Apple TV and a device that points to a company looking at ways of expanding its vast music and movie offerings from beyond the PlayStation, its own TVs and myriad mobile devices.

None of this is happy accident. In 2005, Tim Schaaff was brought in from Apple to head up Sony's alignment of its hardware and software.

As Sony Network Entertainment president he oversaw some major damage limitation after the PSN hack but, more importantly, he brought in a rebrand of disparate Sony software in a bid to offer Sony customers a one-stop shop for content.

Although he retired in November 2012, this 'one Sony' realisation has trickled up to CEO Kaz Hirai who is using it as his mantra, and it is still what the Sony Entertainment Network is about.

This is according to Soichiro Saida, Sony's senior director for the Sony Entertainment Network.

"Sony Entertainment Network is the backbone that connects all Sony devices and is used to deliver the entertainment experience - whether it is games, movies and music," said Saida to TechRadar.

"They are all available on one platform with a single ID and we have a global base of subscribers and a relationship with a majority of countries in the world."

Since the rebranding in 2011, the Sony Entertainment Network has forged itself into every connected Sony device, while also splitting off into app form for non-Sony devices.

In June of this year, Sony made massive improvement to its iOS app to tempt users away from other streaming services - including offline listening and high-quality streaming. These are features Saida believes are integral to Sony offering the best audio service it can.

"We are supporting streaming at a much higher rate - AAC at 320Kbps," explained Saida. "From the consumer point of view, what is the convenient way to be able to get the music I want to listen to, so we put a lot of effort into performance.

"We have offline cache enabled, so you can download songs and by playlist - we have done this on iOS and have had some great feedback."

But it is on its own devices where Sony wants you to use the Sony Entertainment Service. At IFA we saw the announcement of the Sony Xperia Z1, a handset that bakes these services into the device better than any Sony product before.

"With the Z1 Music and Video Unlimited are a completely integrated experience," explained Saida.

"We have a Music Unlimited client for Android and iOS but with Xperia we have an integrated experience on the Walkman app, so you get to where you want to be straight away - with channels, charts, new releases all available within seconds."

It is through these channels that Sony believes it is offering something different.

Where Apple will be tackling tailored music content with iTunes Radio and Spotify relies on crowd-made playlists and apps, Sony's music selection is a lot more thematic.

Let us provide it for you

"We respect that all the other players are deep diving into the music experience. Early adopters and music lovers will really love that," noted Saida.

"But the mass market is yet to discover what subscription services are all about. That for the price of a CD you get to access over 140 years' worth of music.

"We have all of this content but the question is: how do I know what is available? So our focus is all about channels - let us provide the music for you. That is why we offer so many different ways to get to the music.

"Consumers are busy, so they may not have time to create their own playlists but we help you navigate through - we take that hassle from you."

Sony still has some way to go to make the Sony Entertainment Network as ubiquitous as iTunes. Yes, it has got one-ID sign-in but it still needs that one single subscription for music, video and gaming for that added bit of cohesion.

We will see improvements to the service with the PlayStation 4, though. Although Saida wasn't giving much away about how the services will work on the PS4 he did note: "While you are playing games, you will be able listen to the music you want to.

"And now with the PS4 PS button you can hold that down, then use it to control your music - you can use it to play and pause and skip tracks."

It's features like this that Sony will be hoping will not only raise its network above the mountain of entertainment services around but keep you within its eco-system.