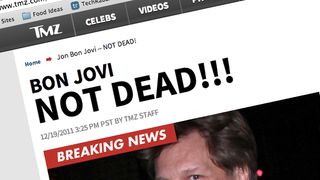 'Hey, man! I'm alive (despite what the internet said)!'

You know how it is. Some little scamp on the internet posts 'OMG Jon Bon Jovi is dead! RIP! #LivinOnAPrayer is my lyf!' and suddenly the world is mourning the evergreen, 50-something sex symbol.

Let's face it, we've all been suckered in by an online rumour at least once. What we really need is an automated online lie detector to cut through the cobblers and filter out the falsehoods. That'd be great, wouldn't it?

Thankfully, help is on the way thanks to the under-construction Pheme project which will check the account to see if it has been created just to spend rumours, while also assessing the validity of sources and the flow of conversations.

The 5-university collaboration is bourne of analysis of social media data taken from the London Riots in 2011 where mis/disinformation caused chaos, panic and often a touch of levity to proceedings. It is hoped that Pheme will result in a tool for journalists that will ensure the false rumours don't make their way into legitimate reports. Let's hope so; our heart's can't take another Bon Jovi rumour.

We're telling the truth when we say more blips are this way. Honest.