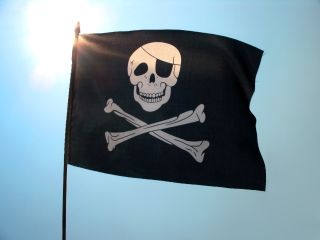 It's foolish thinking to believe piracy can be eliminated

It's been a rum old week for the pirate business.

The Serious Organised Crime Agency (SOCA) shut down music site RnBXclusive.com for sharing music "stolen from artists", replacing it with a warning that "SOCA has the capability to monitor and investigate you" that was presumably written by Robocop.

While SOCA was throwing its weight around, the world's largest Bittorrent database, BTJunkie, decided it would shut down before the copyright cops came a-knocking.

And then The Pirate Bay decided it was going to get out of the torrent business.

Inevitably the Pirate Bay isn't taking down its sails and scuttling the ship: it's merely moving to a harder-to-prosecute form of file sharing. And equally inevitably, the SOCA shutdowns aren't going to stop downloading.

Like the war on drugs, the war on piracy can't be won. So is it even worth fighting? Of course it is.

You'll find exaggeration and outright fibbing on both sides of the debate here. Copyright holders pretend that every time you download a song God kills a puppy, and pro-piracy advocates pretend that the overwhelming majority of downloaders are free-speech activists rather than free-stuff opportunists. Neither side is telling the truth.

Organisations such as the MPAA, RIAA and their European and British equivalents may appear greedy, and backwards, and occasionally breathtakingly incompetent, but they aren't as dumb as they often seem to be.

They know that DRM isn't unbreakable. And they know that for every RnBXclusive.com they shut down, another one will spring up.

The copyright industries are largely based on selling performances, and their anti-piracy crusade is a performance too: the industries don't really believe that they'll eradicate piracy, so what they're trying to do instead make casual copying that little bit more difficult, scare a few site owners into shutting up shop and intimidate a few more into going deeper underground.

If that works - and of course, for it to work there needs to be decent, legal options that aren't unnecessarily crippled - then piracy becomes just enough of a pain in the arse that most people will go to legitimate sites instead.