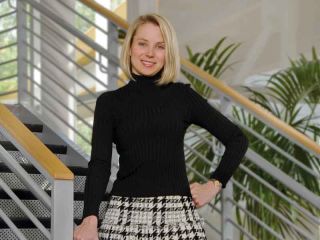 Pretty much every product that Google works on has to go through gatekeeper Marissa Mayer, who decides whether it's ready to be released or needs more work.

She even approves every single Google Doodle that adorns the search giant's homepages around the world. From being hired as the first female engineer nine and a half years ago to becoming one of the key decision makers at Google, she's come a long way.

"We were very small, just 20 people," Mayer, now Google's vice president of search products and user experience, recalls. "There was a tremendous amount of energy, scruffy entrepreneurialism and a sense of hope. We really felt we were working on something that might change the world. We were all very excited to be working on such an important problem and we thought it would really have an impact. Even from that vantage point, though, it wasn't clear to us what type of impact it would have."

Mayer simply didn't anticipate that Google, which had just signed a deal to become Netscape's default search engine when she started, would turn into the biggest internet company in the world. "I actually felt that we had about a two per cent chance of succeeding. That might sound tiny, but actually that's about a hundred times higher than the average start-up. I thought that the odds relative to the other start-ups were very, very good – but even with those odds there was still a lot left to chance."

Chance, it seems, is something Mayer doesn't rate that highly. She's brainy, precise and ambitious, obsessive even, when it comes to shaping Google's product suite.

Critics, notably Silicon Valley gossip blog Valleywag, call her mechanical and robotic – and maybe she has to be to stay on top of it all. She looks after 150 product managers, and every month 10-12 major products are pitched to her.

On top of that, 1,000-2,000 outside projects need to be reviewed. She has to make decisions all the time, and insiders call the rigid process of her critiquing and approving new features 'the Marissa Gauntlet'. Usually, each team has no more than 10 minutes to present their projects. During this time, though, they get her undivided attention – she won't check her email or take phone calls.

Aside from the official meetings, Mayer's office door is open for an hour each day, so Googlers can go in, ask questions and get more advice on a project. Of course, as her job title suggests, the focus is on the user experience. She's absolutely devoted to the needs of the 'end user' and often uses her mom as a reference point to check whether an idea is simple enough.

But what other criteria does she take into account when she decides whether a product is a goer? "I look for the insight and innovation that's baked into the idea," Mayer explains. "I also look at the overall energy and strength of the team that's presenting it. Then I develop an overall sense of confidence that it's both a good product idea and that we have a good team who are interested in moving it forward. If those two things come into alignment, it's going to be a successful product."

Innovation is her real passion (along with cakes – she's actually invested in a speciality cake company called I Dream Of Cake). She uses her '20 per cent time' (the time Google apportions its employees for personal projects) to figure out how the search giant can continue to innovate as it builds new products.

The future of search

As the self-proclaimed search addict points out, there's still a lot of opportunity for innovation, change and progress in search. Although typically tight-lipped about future products, she does hint at the direction Google is going to take.