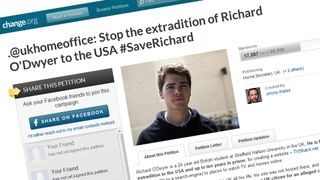 Wikipedia founder Jimmy Wales has thrown his support behind Richard O'Dwyer who currently faces extradition to the US for alleged copyright infringement.

Wales has launched an online petition that has received 17,267 signatures at time of writing and explained why he's backing O'Dwyer in an open letter:

"O'Dwyer is not a US citizen, he's lived in the UK all his life, his site was not hosted there, and most of his users were not from the US," he wrote.

"America is trying to prosecute a UK citizen for an alleged crime which took place on UK soil.

"The internet as a whole must not tolerate censorship in response to mere allegations of copyright infringement. As citizens we must stand up for our rights online."

O'Dwyer's controversial case relates to TVShack, a website he set up which hosted links to pirated films and TV shows.

Although O'Dwyer lives in the UK and committed his alleged infringements in the UK, the US Immigration and Customs Enforcement agency is leading the case against him and claims that he made more than £147,000 ($230,000) from advertising shown on the site.

In January, UK Home Secretary Theresa May approved the extradition after the Westminster Magistrates Court ruled that it was allowed under UK law in January of this year.

Wales isn't taking this turn of events lightly though, going as far as to state that, "Richard O'Dwyer is the human face of the battle between the content industry and the interests of the general public."

If you disagree with the extradition order, you can add your signature to Jimmy Wales' petition here.