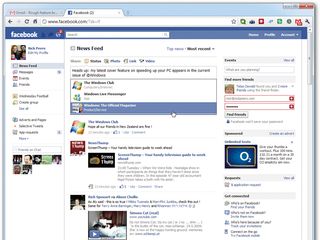 If Facebook is soaking up your free time, claw some back with these handy tips

Do you have hundreds of friends on Facebook? Then it's a good idea to take the time to organise them into different groups, or lists as Facebook describes them.

Lists can be used for privacy reasons - to exclude certain status updates, for example - or simply to simplify the sharing of links, photographs and status updates with a common group of people, such as your family members.

When referring to other Facebook users in your status updates, you can create a link to that person's profile quickly and easily - just type @ followed by the first few letters of their name, and then select them from the list that pops up.

While sharing the odd photo or movie through Facebook is easy enough, it can be time-consuming fiddling about with photo albums, particularly when all the functionality you need for sharing both photos and video can be found in Windows Live Photo Gallery and Windows Live Movie Maker. Prepare your photos or movies in these tools, then quickly upload them by clicking the Facebook button, which can be found on the Home tab in both applications.

There's also an official Twitter app in Facebook that does the same with your tweets, but it doesn't allow you to choose which tweets filter through to your blog; instead, install the Selective Tweet Status app and then you choose exactly which tweets get posted to Facebook by adding the #fb hashtag to the end of your tweet.

The following Facebook shortcuts work in Chrome. If you are using Firefox, then you'll need to add Shift (eg Shift + Alt + 1). In IE, you'll need to hit Return after pressing the Alt key with a corresponding number. Note that not every shortcut appears to work in every browser - give them a try and see which ones work for you.

Alt and 1: Show your news feed.

Alt and 2: Switch to your profile.

Alt and 3: View pop-up of any friend requests.

Alt and 4: View pop-up of any messages.

Alt and 8: View Facebook's own profile.