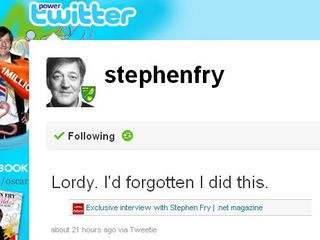 In an exclusive interview with .net, posted earlier this week on the magazine's website, Stephen Fry explained that he wields so much power though his Twitter account that he can bring down a site with a single tweet.

"When I tweet a link it usually gets around two or three thousand requests a second," he noted.

"Especially if I word it in a way where I really want people to go to a site."

Don't believe him? Well, .net found out the hard way when the Fry posted a link on his Twitter page to the video interview, simply explaining: "Lordy. I'd forgotten I did this."

Minutes later and a few screams from the .net crew – we should know as the mag is part of the TechRadar group – the site was down, proving that Fry has taken the baton from Slashdot when it comes to bringing down sites with a single link.

"Mr Fry's representatives usually send out what they refer to as a 'severe warning' before he tweets a link," says Dan Oliver, Editor of .net.

"You get a mail with the following info: 'A given website should be able to handle 500+ calls per second in order to be able to stay live once Stephen's Tweeted. There are three waves of capacity within that hour with the 2nd wave of retweeting generally as strong as the first'.

"Delighted as we were that Stephen Fry retweeted our video link, we never received a warning, and the site got FRY'D! Thankfully, it was a fairly short outage, and the site was back online within 10-20 minutes."

Still, with great power comes great responsibility (thank you Uncle Ben), something Oliver agrees with: "I think, considering much of the interview with Fry concentrates on his Twitter influence, the main word associated with our site outage was 'ironic'.

"And it was. We've dealt with big spikes before, but this was simply unprecedented, and yet another example of the huge influence Stephen Fry's Twitter status affords him online."

The story is definitely something Alanis Morrissette would sing about, if she actually knew what the word meant.

To watch the whole video interview, go to www.netmag.co.uk/fry.