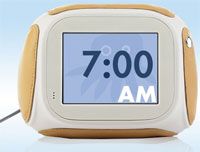 Good morning, it's your fun and funky Chumby!

The cutesy little Wi-Fi enabled Chumby alarm, err, ‘thing’ - pictured here - launched to much fanfare in the US this week, at a cost of $180 (£90). No release date or pricing have yet been announced for the UK.

“The prototypical alarm clock of the cyberage may well turn out to be Chumby, the cuddly and versatile new gadget I've been testing. This compact Wi-Fi-connected touch-screen internet 'appliance' does a lot more than wake you up,” read an excited review in USA Today.

The funny-looking thing even allows you to play games and contains an accelerometer. Is there anything this thing can't do? If it were combined with a retro teasmade then you could almost have the perfect morning alarm set-up.

Aside from a few niggles with the touchscreen controls, the first reviews appearing in US press are very positive indeed.

Perhaps the most appealing thing about Chumby, aside from its cutesy aesthetic, is the fact that there are no internet fees. The Wi-Fi features are funded by advertising, though at the time of going to press a premium subscription model had still not been ruled out.