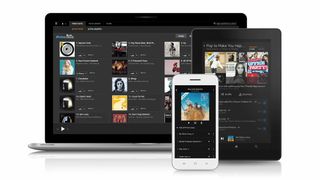 Amazon: the best streaming service is the one you've already got

The music streaming business in the UK is a crowded one, so there are limited ways to get your product seen. Apple recently showed you can do it, with the launch of Apple Music. But no other company in the world has a self-perpetuating hype machine like Apple does. Not even Amazon.

But that didn't stop Amazon launching its streaming service in the UK this week, a year on from it arriving in the US, immediately boasting millions of subscribers.

Amazon Prime Music UK is automatically bundled into your Prime membership. It sits alongside a number of other extras that have been added to plump Prime up, making it a service that caters to customers needs of wanting everything right now, or at the very least on a next-day delivery, which was the entire point of Prime when it first launched back in 2007.

It offers on-demand movies through Amazon Prime Instant Video, unlimited Kindle rentals and a photo archive service. All of these deliver on-tap media and now Amazon has added music-streaming into its Prime-ordial soup.

Amazon is looking at music in a different way to its rivals, so much so that it doesn't want to refer to Spotify and Apple Music as rivals.

"We are not trying to do the same thing as Apple Music or Spotify," explains Steve Bernstein, director of Amazon's digital music services in Europe.

"They charge £120 a year, so they have to go head-to-head as it is unlikely that people will subscribe to both of those. Amazon Prime Music is trying to do something completely different.

"We are charging £79 a year for Prime, so you get 1 million songs for free plus Prime Instant Video, shipping benefits and more."

This is a key differentiator. Amazon Prime Music has launched in the UK with far fewer tracks. Both Spotify and Apple Music have catalogue of some 30 million songs for their users to choose from but Amazon is trying to turn what could be seen as a failing as their USP.

Having the service as an added extra to Prime, rather than a standalone service means that - in Amazon's eyes at lease - it isn't 29 million songs down to other streaming services, but their customers are 1 million songs up.

"We already have millions of Prime customers in the UK and from launch of this service they now have free access to a streaming service," says Paul Frith, head of Music for Amazon UK.

"All 30 million tracks that are available on Spotify and others are available to buy through Amazon. What we have done with our music service is select just over a million songs that we know will be really popular with our customers."

To make sure that as many of those songs are listened to as possible, Amazon has drafted in UK-based music journalists to curate some 500 playlists that it believes have been given a distinctly British flavour.

"The important distinction is that we are not just taking the same service in the US and releasing it to the UK," says Bernstein.

"We have spent a lot of time building the service from the ground up for British music customers. We have a strong sense as to what works, thanks to the data we already have on our customers."

And that is Amazon's tactics for Prime Music - to tailor the service to its customers needs, using its own data, regardless of whether their customers actually want it or not.

"Our message to our customers is that the best music streaming service for you is the one that you have already got. It's called Prime Music and it is part of your subscription," says Frith.

When the general public changes how it consumes media there is always an obvious transition. Vinyl sales died because of tape, tape made way for CD, CD for download, download for streaming. But, alongside this natural progression there is an ugly blame game, especially when businesses begin to die out.

Amazon was part of this when traditional music outlets on the high street started closing. The blame was placed firmly on the internet, on online retailers pushing customers to buy with mouse clicks than footsteps.

For the current state of the music industry, the internet is still to blame but it's now the streaming giants that are bearing the brunt of criticism both from artists and record labels.

Amazon is no longer where the finger is pointed, it's Spotify.

At the moment, Amazon seems content to take a backseat and do its own limited service to its current Prime user base. But you can bet execs on high are secretly wishing that one day that will change. The ones that take the biggest flack are inevitably the ones reaping the benefits from a changing industry.

Amazon knows this. When it comes to music, it used to be them.