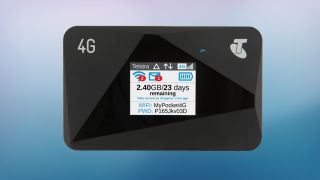 In case a national Wi-Fi network doesn't tickle your fancy, Telstra is offering up another Wi-Fi option

Telstra has a new Wi-Fi hotspot on offer, the Pre-Paid 4G My Pocket Wi-Fi Ultimate, future-proofed with support for the 700MHz spectrum band that the telco will be able to switch on next year.

Telstra won the 700MHz spectrum as part of the Digital Dividend auction, and following the final shutdown of analog TV this year, telcos Telstra and Optus will be able to switch on the 700MHz band for use beginning early 2015.

Telstra says that the new spectrum will be used for its "network evolution and will offer customers wider regional and deeper in-building 4G coverage, improved speeds and more capacity."

"Owners of the My Pocket Wi-Fi Ultimate will be among the first to benefit when we switch this new spectrum on," Telstra said.

But until the 700MHz spectrum band is switched on, the Pre-Paid 4G My Pocket Wi-Fi Ultimate hotspot, which has dual-band Wi-Fi support, will be using the 2.4GHz band and 5GHz band for range and speed.

The hotspot supports up to 10 devices, with Netgear, the manufacturer of the device, stating that it has a a 10 hour battery life.

You also have the option for a "guest" connection, and along with using the web portal, you can also use the Netgear AirCard App for iOS and Android devices to manage the status, connection and settings of the hotspot.

The Telstra Pre-Paid 4G My Pocket Wi-Fi Ultimate is available now through Telstra stores and online for $149, and includes 5GB of data.