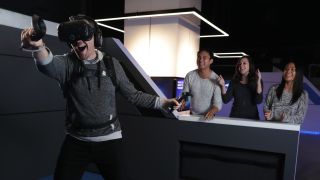 Social VR experiences once looked like the future of entertainment, solving the inherent loneliness of strapping on a headset and cutting yourself off from the world, but IMAX has had a change of heart and decided to power down its last three virtual arcades in Los Angeles, Bangkok and Toronto in early 2019.

Variety spotted the news in a financial statement. "In connection with the company’s previously-announced strategic review of its virtual reality pilot initiative, the company has decided to close its remaining VR locations and write-off certain VR content investments," IMAX said in the filing.

In 2017, virtual reality was at the forefront of IMAX's plans. Brimming with enthusiasm, the company intended to pack unused cinemas around the world with 'pods' offering premium VR equipment to give an experience a cut above what theater-goers could get at home.

The only potential stumbling block seemed to be a lack of content, but IMAX planned to solve this problem by developing its own VR camera in partnership with Google, with a $50 million fund to create new 'experiences'.

However, in August, the two companies dropped the project (possibly due to Google changing tack to focus on augmented reality), leaving IMAX with a lot of headsets and not much to show on them. The closure of its remaining VR centers is therefore disappointing, but not surprising.