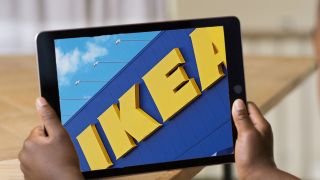 We know that iOS 11 is going to go big on augmented reality when it arrives for iPhone users later in the year, and Ikea's Michael Valdsgaard has spilled a bean or two about how his company is going to be involved.

Ikea was briefly mentioned alongside iOS 11 in the WWDC keynote earlier this month, and Valdsgaard says the plan is to let iPhone owners see how furniture looks in their homes before they take it home from the store. Apparently the technology is going to be so good that you'll be able to place items to the exact millimeter, 9to5Mac reports.

"This will be the first augmented reality app that allows you to make reliable buying decisions," Valdsgaard told Swedish outlet Digital.di,"When we launch new products, they will come first in the AR app." He added that Ikea is hoping to have 500-600 catalog items ready to view in 3D at launch.

Speaking of launching, the company is rushing to get the technology ready for the public release of iOS 11 and the unveiling of the iPhone 8 in September. Apple's next flagship is expected to feature an AR-enhanced camera, and CEO Tim Cook has repeatedly talked up the potential of augmented reality

It sounds as though Ikea and its AR app could be playing a prominent role at the iPhone event if Apple is keen to show off what it's been working on - don't rule out Apple software boss Craig Federighi trying to position coffee tables and sofas on stage as the new hardware is unveiled.

Apple has made its ARKit tool available for any developer to pick up and use, and should ensure a smooth and stable AR experience on Apple's phones and tablets. If Apple and its partners can get some seriously cool tech ready in the next three months then it could leapfrog Microsoft and its HoloLens in the AR race.