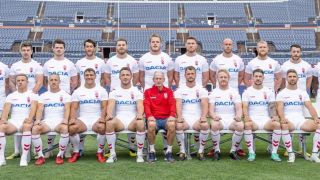 New Zealand vs England rugby union - where and when

It's been a particularly long journey over for the Kiwis, with the Sports Authority Field at Mile High, Denver, Colorado hosting this one.

The England football team's second match at the FIFA World Cup may be stealing most of the limelight this weekend, but the country's rugby league outfit has an important contest of its own, taking on New Zealand in the United States.

England coach Wayne Bennett is using the international to blood two debutants, with Jake Connor and Tommy Makinson set to start in Denver. The Kiwis have a significant debutant of their own, with Michael Maguire managing his first game as coach of the side.

Result! The New Zealand vs England rugby league clash will be shown live on BBC Two in the UK. That means you can watch it for free on your TV when it kicks-off at 9.10PM BST.

Alternatively you can live stream the action via the BBC iPlayer platform or through a third-party online streaming TV service such as TVPlayer.com. This means you can catch the match on TV, computer, tablet and smartphone for free if you're in the UK.

Not in the UK this weekend? No worries - just download and install a VPN and use a UK location to watch as if you were back in blighty. Full instructions below.

If you're outside the UK and try to start streaming the rugby league on BBC Two, you'll soon discover that it is location restricted. But there's a way you can watch for free anyway. By downloading and installing a VPN, you can effectively trick your computer into thinking that it's in the UK. That way you can enjoy the free coverage without having to pay your local broadcaster or find an illegal stream.

It's really easy to get started with a VPN - here's how to do it:

1. Download and install a VPN
If you don't have easy access to watch New Zealand vs England online in your country, the best way to watch it for free is to download and install a VPN. We've tested all of the major VPN services and we rate ExpressVPN as the absolute best. It's compatible with all of your devices, supports most streaming services and ranks amongst the fastest. You can even install it on devices like an Amazon Fire TV Stick, Apple TV, Xbox and PlayStation. So for a one-stop shop, you can't go wrong with Express - but there are more fantastic VPN options out there as well:

2. Connect to the appropriate server location
Simply open the VPN app, hit 'choose location' and select the appropriate location - it's super easy to do. Choose UK if you want to stream New Zealand vs England on TVPlayer using the link below.

3. Go to TVPlayer.com
TVPlayer.com is a very handy little website that hosts all of the UK's freeview channels on one handy website. It's free to use, completely legal and lets you channel hop at your leisure

Just a word of note though, one or two sporting events recently have been unavailable on TVPlayer.com. We don't suspect this will be the case with the rugby, but if it is then just head to another local broadcaster to tune in.

How to watch the rugby league live in New Zealand

In New Zealand, Sky Sports has the rights to show the Kiwis take on England in the rugger in the US. That means access via the Sky GO app for subscribers as well.