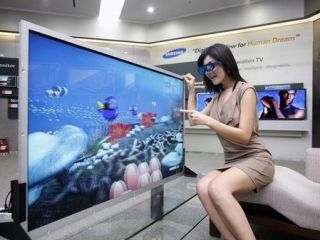 Samsung has shown off a prototype 55-inch 3D LCD TV in Seoul – proving the manufacturer is very much behind 3D in the home.

The screen runs at 240Hz (120Hz for each eye) and works with active shutter glasses, a technology that both Sony and Panasonic are 'actively' behind.

Samsung is claiming that its technology limits the amount of blur seen in 3D, because it uses something called alternative framing, which brings a slightly different perspective to each eye.

If this is the case, then it will be good news for the technology as image blurring is right at the top of the complaints list when it comes to watching 3D movies.

In the Korean press release a mysterious 52-inch TV is also mentioned, which seems to be an autosteroscopic 3D display for the likes of "schools, shopping malls and other public places".

No prices or release dates have been made available for either device, but expect more information on the displays at CES 2010.